The Other Happy Pill: Probiotics Shown to Mitigate Depression and Anxiety

To put this into more concrete terms, you’ve probably experienced the visceral sensation of butterflies in your stomach when you’re nervous, or had an upset stomach when you were very angry or stressed. The flip side is also true: problems in your gut can directly impact your mental health, leading to issues like anxiety, depression and autism.

It has long been known that probiotics, or “good bacteria” taken in pill or powder form, help maintain healthy gut flora beneficial to general health. Countless studies have also shown probiotics to perform a wide variety of healthy functions, including improved digestion, regularity and immune system functioning. But a study published in the journal BMC Gut Pathogens breaks new ground. Conducted at the University of Toronto with chronic fatigue syndrome (CFS) patients, this study found that a two-month protocol of probiotics not only boosted the “good” bacteria in their gut but also led to a significant decrease in their depression and anxiety symptoms by addressing their effect on the feel-good neurotransmitter L-tryptophan.

“We were quite excited with the fact that these were positive results and we felt that probiotics truly have a role to play in the management of neurophysiological disorders such as anxiety, such as depression and other symptoms associated with that,” said Rao, the research leader. “Rather than going into medications, which may result in side effects, it’s a safe, it’s a very easy way to manage problems such as that.” 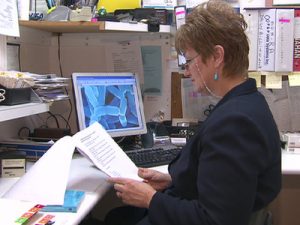 Dr. Alison C. Bested, the co-author of the study, says Bifidobacteria appears to increase levels of tryptophan in the brain, a chemical that ‘helps people feel better.

Rao and Bested believe that probiotics “crowd out” the more toxic stomach bacteria linked to depression and other mood disorders. “Bifidobacteria appears to increase levels of tryptophan in the brain, a chemical that “helps people feel better.” Patients taking the probiotic also showed a marked improvement in their digestion, experiencing less bloating and gas and a reduction in inflammation. The findings are “huge,” Bested said. “The subjects felt less anxious, they felt calmer, they felt better able to cope with their illness, they were sleeping better, had fewer heart palpitations and less symptoms of anxiety,” she said. “We were pleasantly surprised, that people who were taking probiotics were able to lower their anxiety.”

Rao explained that the good bacteria produce “compounds that get to the brain and help the brain to manage problems associated with behavioral and mood problems, such as anxiety and depression.” He said the findings open “a door to a whole new field and that is the relationship of gut micro flora, or gut bacteria, to many disorders – mental disorders being one of them. So it opens a door to many future research and applications in this area.”