Getting Your Fats Straight: Organic Virgin Coconut Oil is a Good Fat!

Traditional and social media were awash with coconut oil news this week after the American Heart Association (AHA) issued its opinion on dietary fats. For more than a decade the AHA has ignored study after study extolling the benefits of organic virgin coconut oil only to pounce on a study that finally fit its industry-biased narrative of saturated fats being unhealthy. This is equivalent to firing an arrow into a wall and painting a bullseye around it. (Please note that when reading this blog, all emphasis is mine unless otherwise noted). 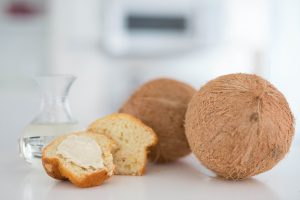 Coconut oil is a good fat

A 2015 study by Fabian Dayrit concluded “Coconut oil is rapidly metabolized because it is easily absorbed and lauric acid is easily transported. Detailed studies have shown that the majority of ingested lauric acid is transported directly to the liver where it is directly converted to energy and other metabolites rather than being stored as fat.”

The AHA points to an increase in LDL cholesterol in its justification for advising against consuming coconut oil. Many publications have seized this nugget to create clickbait headlines rife with hyperbole ranging from grossly misleading (Coconut Oil as Bad For Heart as Butter, Beef Fat) to patently false (So Coconut Oil Is Actually Really, Really Bad For You).

Here is the science that the AHA and the media are glossing over.

HDL is “good” cholesterol because it removes LDL cholesterol from the blood stream, hauling it off to the liver to be converted. When a doctor prescribes statins to a patient with high cholesterol it is because statins increase HDL thereby lowering LDL.

According to the AHA “A low HDL cholesterol level is associated with a high incidence of cardiovascular disease (CVD)… HDL can stimulate the removal of cholesterol from cells, including those involved in atherosclerosis, and can deliver the cholesterol to the liver where some of it may be secreted in bile and excreted, a process called reverse cholesterol transport.”

Another important finding in the study is that butter raised LDL more than coconut oil when compared to safflower oil, but butter has significantly lower levels of medium-chain fatty acids. According to the ACA study, “Both butter and coconut oil raised LDL cholesterol compared with safflower oil, butter more than coconut oil.” It is important to point out that the AHA advised against the use of coconut oil “because coconut oil increases LDL” but stopped short of advising against eating butter or beef fat when their “trials did not find a difference in raising LDL cholesterol between coconut oil and other oils high in saturated fat such as butter, beef fat, or palm oil.” Assumedly because the Beef and Dairy Councils are well funded and extremely powerful lobbies. Coconuts are not produced in the US therefore an equivalent council doesn’t exist.