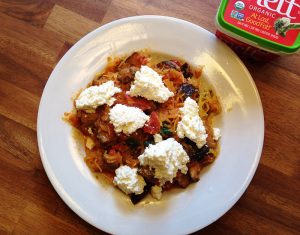 While traveling in Sicily, my husband and I discovered Spaghetti ala Norma, a pasta dish made with tomatoes, fried eggplant, ricotta cheese, and fresh basil that quickly became a favorite. Originating in Catania, located on the east coast of Sicily, Spaghetti ala Norma is named after Vincenzo Bellini’s opera, Norma. Instead of wheat spaghetti noodles, this version is made with spaghetti squash – a delicious, hearty, and easy-to-digest replacement.

1 spaghetti squash, cut in half lengthwise