Quest for the Perfect Pie Crust 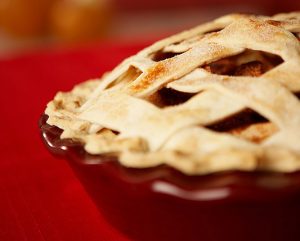 For many decades I was comfortable with the illusion that my mother’s pie crust is indeed the very best in the land. My almost religious belief in this universal truth was shattered recently when my blackberry pie was pitted against Meg’s mother’s cherry pie. I am still firm in the belief that my pie-filling was better than hers (personal preference for blackberries). However, I was forced to expand my universe to include other people’s pie crust as equal, nay better, than my mother’s secret recipe. What was the critical difference between the two? They were both thin, flaky crusts made with Melt® instead of butter (my husband can’t even taste the difference between pie crust made with Melt® vs. butter); both crusts complemented the pie filling in a way that only homemade pie crust can do.  The critical differences lay in the finishing touches. While my mother has had a rather Spartan aesthetic with her pie crust allowing the superior texture to stand on its own, Meg’s pie crust was lightly brushed with egg white and sprinkled with sugar to make it sparkly. Damn her sense of aesthetics!